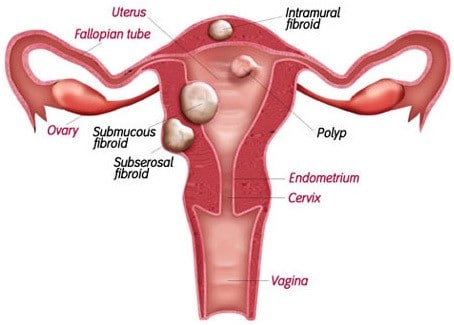 Uterine Fibroids, also known as leiomyomas, myomas or fibromas, are the most common benign tumors of the uterus. Most women have no symptoms. They range in size from very tiny to some of them being so large that they push the bladder or the ribs. Some are single fibroids and other form in clusters. They also differ in their growth pattern – some remain in the same size, others grow and enlarge rapidly while few other shrinks in their size.  Uterine Fibroids usually appear during the childbearing age.

Fibroids are classified into following types based on their locations:

Most of the women who have fibroids don’t have any symptoms. Few of them have and the symptom depends on their size, location. Common symptoms include:

The exact cause of fibroids is not known. However, there are research which shows certain factors that could play a role:

Fibroids are generally seen during the reproductive age when there is increased production of hormones like estrogen and progesterone. It is also noticed that fibroids often shrink after menopause due to decrease in hormone production.

Uterine fibroids, depending on the condition, can be diagnosed by Pelvic exam, X-Ray, Ultrasound, MRI, CT scans, endometrial biopsy, hysterosonogram (HSG) and blood test. The best way to detect uterine fibroids are through ultrasound examination.

For cases without any symptoms, doctor advises no treatment but intermittent observation. In women whose fibroids are large and are causing significant symptoms, treatment become necessary. Suitable treatment option will be suggested based on the condition:

It involves the removal of the entire uterus.

Fibroids are removed but the uterus is left intact

The levels of estrogen are reduced and “Medical Menopause’ induced

A progestin-releasing intrauterine device can relieve heavy bleeding caused by fibroids. They only provide symptom relief.

This medication is given to ease heavy menstrual bleeding. Again only provide symptom relief.

They are given to relieve pain and inflammation

It A specialized instrument is inserted in your uterus which uses either heat, microwaves, hot water or electric current to destroy lining of the uterus. It either stops menstruation or reduces menstrual flow.

It is a minimally invasive procedure where the arteries supplying blood to the fibroids are embolized (blocked).

For questions related to Uterine Fibroids and their treatment options, drop your message here – http://www.kjkhospital.com/contact-us/