Top 9 Causes of Infertility in Women 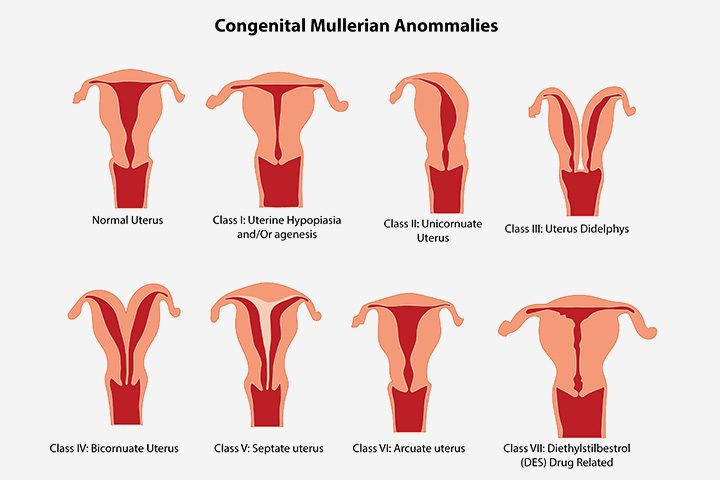 Congenital uterine anomalies, also called Müllerian duct anomalies, are malformations of the uterus that develop during embryonic life. When a woman is in her mother’s womb, her uterus starts to develop. It actually starts as two small uteri, which migrates down separately and ultimately fuses to form a single uterus. Normally, the wall where the two uteri join, reabsorbs completely, from the bottom to the top – resulting in a triangular shaped uterine cavity. Any alteration to this development, leads to what is called Congenital Uterine Anomaly.

There are no known causes of Congenital Uterine Anomalies. Neither are there any particular symptoms. Some women might have pain with their menstrual periods. These anomalies are often diagnosed during evaluations for infertility or pregnancy loss.

Septate Uterus is a deformity of the uterus wherein a membrane called septum divides uterus in the middle. The septum may extend only partially into the uterus (partial septate uterus) or it may reach upto the cervix (complete septate uterus)

It is one of the most common Congenital Uterine Anomaly. A Bicornuate uterus means the uterus is heart shaped with a deep. Indentation at the top. This means that the baby has less space to grow that in a normal shaped womb.

This abnormality of the uterus, also called ‘single horned uterus’  is a rare one and happens when the tissue that forms the uterus does not develop properly. A Unicornuate uterus is smaller than the normal uterus has only one fallopian tube. There will be a second smaller piece of uterus, called a hemi-uterus. This smaller uterus may not be connected to the rest of the uterus.

Didelphic Uterus also called a double uterus, is a rare uterine abnormality. There will be two separate uterus, each one with a cervix. Women with Didelphic Uterus often have successful pregnancies, however they are at higher risk of preterm delivery or miscarriages.

They are also diagnosed during a laparoscopic procedure.

Many women with a congenital uterine abnormality does not require a treatment. If the abnormality causes a miscarriage, infertility issues or pain, a gynaecologist may recommend surgical correction. Most cases of these anomalies can be corrected using a minimal invasive surgery like laparoscopy of hysteroscopy. The type of surgery recommended depends upon the type of abnormality and the woman’s reproductive history and health.

In case of a unicornuate uterus, the obstructed hemi-uterus can be removed if the other part of the uterus is normal and functional.

A dividing uterine septum can also be removed to open up the uterus.

Women who are at higher risk of preterm delivery or late pregnancy loss due to a congenital uterine abnormality, may need a stitch in the cervix (called a cervical cerclage) to prevent premature dilation.

There are certain types of uterine abnormalities which are not congenital but develop after birth. These are referred to as “Acquired Uterine Abnormalities”.  Some  examples of such abnormalities includeUterine fibroids, endometrial polyps, intrauterine adhesions etc