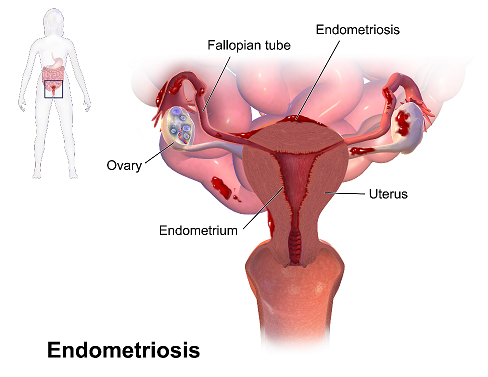 Uterus in a women’s body is lined from inside with tissues called endometrium. During the regular menstrual cycles, these tissues build up, break down and shed blood which comes out of the vagina. In endometriosis, the endometrium lines outside the uterus and at times attach to other organs like ovaries, fallopian tubes, the bowel etc. These displaced endometrial tissues continue to behave the same way during each menstrual cycle. However, when they thicken, break down and bleed there is no way for this debris to come out. Hence, they form scar tissues and cause painful adhesions.

Endometriosis mainly affects girls and women in their reproductive age group. It rarely occurs in the pre-puberty period or after menopause.

Some women with endometriosis have no symptoms at all while others will report severe pain and other associated problems due to endometriosis.

Some of the common symptoms include:

Pain with bowel movement and urination

Infertility – commonly diagnosed in women seeking treatment for infertility. The stage of endometriosis is not related to the severity of symptoms a woman experiences.

The exact cause of endometriosis has not been identified. However, there are several theories explaining the causes as follows:

– Menstrual blood containing endometrial tissues flowing back through the fallopian tubes – and into the pelvic cavity and sticking to organs present there (this is called Retrograde Menstruation).

– Endometrial tissues getting transferred through a surgical scar during a surgery like C-section or hysterectomy.

– Primitive cells in the pelvic area may change into endometrial cells

Endometriosis can only be confirmed using a surgery, most commonly used is laparoscopy (Minimally invasive surgery). However, based on the patient’s medical history, discussion, and physical examination – a doctor can suspect strong case of endometriosis and can refer to a surgeon for confirmation.

Surgery is advised in cases of extreme endometriosis. As endometriosis is conclusively diagnosed during a surgery, most of the intervention is done during that time.

For any questions related to Endometriosis and their treatment options, please drop your queries here – http://www.kjkhospital.com/contact-us/